Transmission and Hydraulic Oil Coolers
Northern round tube & fin (RTF) oil coolers are interchangeably used for cooling a variety of oils and fluids in a wide variety of truck, agricultural, and industrial equipment applications. Because the uses overlap and the coolers are the same, any given RTF style cooler may have hundreds of OEM part numbers. But unlike other parts, if you can identify the cooler by sight or dimension, you can easily find the replacement cooler.

All Northern RTF coolers' heat transfer performance is enhanced by the patented inner fin turbulator. Rated at 200 psi operating pressure, the RTF cooler offers a cost efficient high performance alternative to the light duty coolers used as OEM on thousands of pickups, SUVS, trucks, tractors and construction equipment. For best results, Northern recommends that the RTF Oil Cooler be mounted in front (on the grill side) of the radiator. 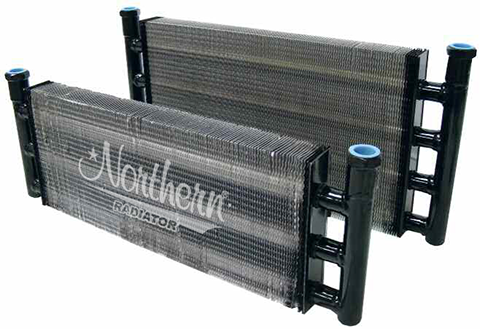 Hydraulic and Hydrostatic oil coolers are used in thousands of OEM applications and while each has an OEM part number, the coolers used are usually identified by visual features i.e. number of rows of tubes, physical size and inlet & outlet fitting requirements. Since tracking OEM part numbers of the various uses is an impossible task, we suggest you use physical appearance, product measurements and inlet/outlet characteristics to help you make your product selection.